People paying attention to gold were treated to an interesting headline this week:

This news was met with a surprising amount of commentary, mostly because Warren Buffett is famously on record as saying that:

“Gold gets dug out of the ground in Africa, or someplace. Then we melt it down, dig another hole, bury it again and pay people to stand around guarding it. It has no utility. Anyone watching from Mars would be scratching their head.”

Many commentators noted that Buffett had sold key bank stock holdings at the same time, and that he was not exactly buying gold but rather shares in a gold mining company (Barrick Gold).

But maybe The Oracle of Omaha noticed that the precious yellow metal with no utility has actually outperformed the shares in Buffett’s much-admired investment company Berkshire Hathaway? The chart below shows a comparison, even before gold’s recent price runup:

Here at SendGold we think it’s even more interesting to consider what another Buffett has said about gold. This other Buffett was Warren’s father, the Honourable Howard Buffett, former U.S. Congressman from Nebraska. 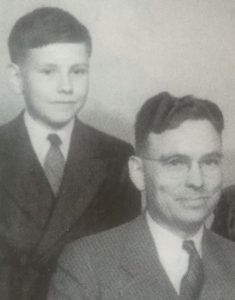 A young Warren Buffett poses with his father Howard Buffett

In an article entitled “Human Freedom Rests on Gold Redeemable Money”, Warren’s dad Howard hits many of the fundamental reasons we believe that people should own gold:

“The owner of gold redeemable currency has economic independence. He can move around either within or without his country because his money holdings have accepted value anywhere.”

“The subject of a Hitler or a Stalin is a serf by the mere fact that his money can be called in and depreciated at the whim of his rulers… Under such conditions the individual citizen is deprived of freedom of movement. He is prevented from laying away purchasing power for the future. He becomes dependent upon the goodwill of the politicians for his daily bread.”

“I will not take time to review the history of paper money experiments. So far as I can discover, paper money systems have always wound up with collapse and economic chaos.”

“Without our support (the Federal Reserve System), under present conditions, almost any sale of government bonds, undertaken for whatever purpose, laudable or otherwise, would be likely to find an almost bottomless market on the first day support was withdrawn.”

Congressman Buffett’s letter is worth reading in whole:

So like father, like son? The good news is that you can be your own Warren (or Howard) Buffett. With SendGold.

Insights – is the ‘party’ in gold just getting started?

Insights – what Wirecard teaches us about life post-Covid