Gold reaching all-time record highs in 74 countries is simply a reminder of why people invest in it: because it insulates your wealth from the foolishness of banks and governments.

The writer Robert Louis Stevenson once wrote that “sooner or later everyone sits down to a banquet of consequences”.

The currency wars, trade wars, negative interest rates, and social upheaval dominating the headlines are all just signs that a feast of consequences of misguided economic policies around the world is just getting started.

There is no Free Lunch. 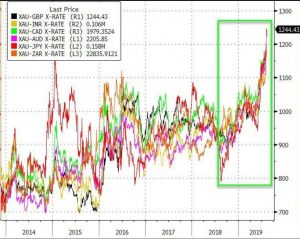 Since the start of the GFC we’ve been told that the solution to a problem of too much debt is more debt. Since 2007 global debt has ballooned by 60% to an astounding $250 trillion.

But this “solution” ignores one simple fact: one man’s debt is another man’s income. So while more borrowing temporarily props up asset and property markets, the record low interest rates that stimulate the borrowing impoverish people saving money in a bank account. It also threatens pensions, insurers, and banks themselves, who no longer have a steady source of risk-free income.

And debt doesn’t “create demand” for goods and services, it simply serves to move existing demand from the future into the present.

And to compound this: the consumption comes and goes but the debt remains, leaving even less room in future budgets for consumers to spend.

To address all of this the world’s bankers look into their toolboxes and find just two solitary items: a nail (debt) and a hammer to drive it with (interest rates on that debt). So to hammer even more debt into the system, instead of charging interest to borrow they pay people to borrow. Aside from the obvious, Alice-in-Wonderland alarm bells this should set off, it also has a simple and devastating side-effect: who wants to own a currency that pays no income, or worse, confiscates part of your principal? Can that currency even legitimately be called “money” anymore, since it no longer serves money’s primary purpose as a store of value?

A downward cycle of wealth destruction ensues as countries compete to have the “cheapest” currency.

The Currency War Race to the Bottom

Currency wars are founded on the simple (and completely misguided) idea that you can make your country richer by making its citizens poorer. Countries race to make their national currency worth less, supposedly to make their exports more attractive to buyers. Again we must wonder what the geniuses in charge have in mind: to get paid less for exports (like iron ore and wheat) because you want to stimulate the amount of those exports?

And what does “winning” a currency war even look like anyway? Your citizens are working harder than ever but are simultaneously poorer than ever? 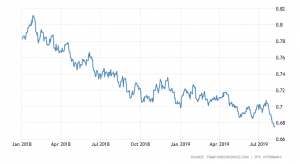 It’s been depressing to see Australia joining the currency war. This is one race no nation should hope to win.

Gold to the Rescue

We think it’s obvious but the reason we hold money is because it gives us the power to buy things. People don’t really want money, they want to own a pair of shoes or have a meal or take a vacation to Bali. Investors and savers around the world, through every economic calamity in history, have chosen to own gold, the premier form of money, because it is independent of the kind of foolishness of banks and governments discussed above. Gold serves as a store of value that is not tied to national currencies, failed economic theories, or the whims of faraway central bankers.

In recent years blockchain currencies (like Bitcoin) have been widely touted as “stores of value” and “digital gold”. While we think blockchain currencies do share a few interesting characteristics with gold (like independence from the financial system) we struggle to see how a currency (Bitcoin) that just a year ago lost 80% of its value can be referred to as a “store of value”. Perhaps once it has survived its first business recession or remained stable through its first economic (or even military) war it can gain that coveted title.

In the meantime SendGold makes it simple to own and use gold.

And with the trends outlined above set to continue (or worsen) it may a good time to declare your financial independence.