Gold buyers normally pay close attention to inflation because gold tends to keep up with the rising cost of goods and services while bank currencies do not. In the last period of high inflation (the 1970s) gold rose more than 2,200% as a result, so savvy investors prepare by buying gold when they see similar circumstances on the horizon.

Fed Chairman Volcker raised interest rates as high as 18% in the late 1970s in order to slow inflation down, but that option is not available to the Fed today because there is simply far too much debt on the books. Raising interest rates would mean that households, corporations, and the government itself would not be able to pay the interest on what they owe and would be forced to default, also a favourable outcome for gold owners.

This time is different

Making the problem worse, the Fed today effectively has given the U.S. Treasury a blank cheque to print as much new money as it pleases under the open-ended rationale of the pandemic lockdowns. The signal that this is the de facto policy going forward was the recent appointment of former Fed Chair Janet Yellen, who presided over much of the current debt super-bubble’s creation, as U.S. Treasury Secretary.

The quantities of money the U.S. Treasury are printing this time around are staggering: 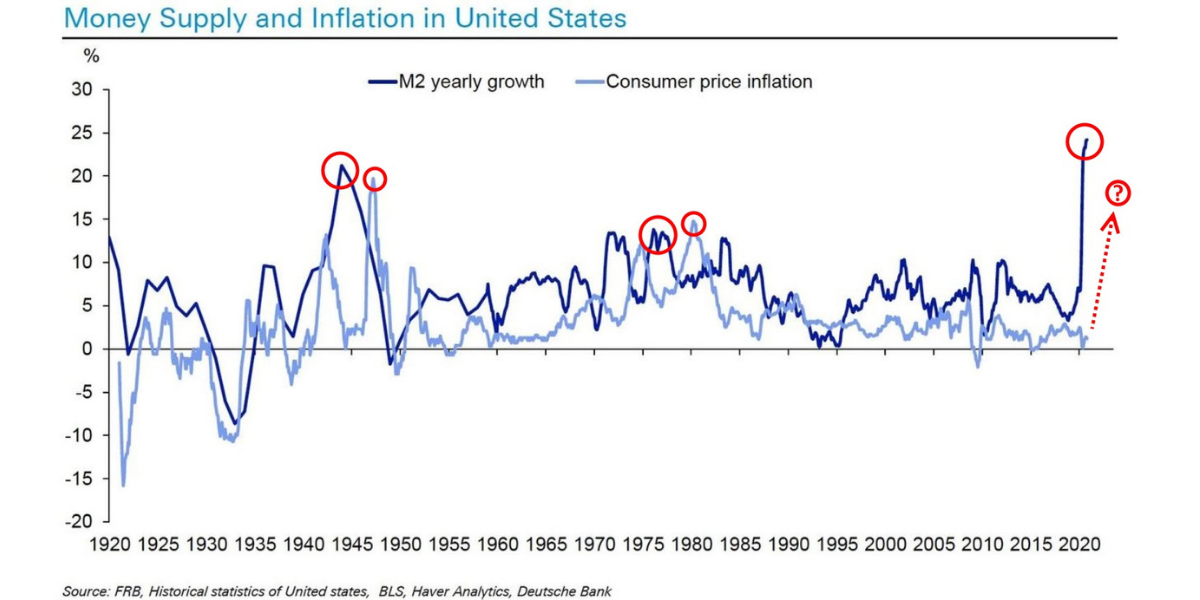 Does the disease justify this much cure?

Wheelbarrows of new money are being rolled out to replace the money people and businesses lost during the lockdowns.

But Morgan Stanley Chief Economist Chetan Ahya points out that the amount of stimulus has already far exceeded the shortfalls. “Cumulatively, the Covid-19 recession has cost U.S. households US$400 billion in income,” wrote Ahya last week, “but they have already received more than US$1 trillion in transfer payments. And this amount is set to rise by another US$2 trillion (9.5% of GDP) by early March once the additional fiscal package is enacted”.

To date, the relief cheques have not resulted in higher spending and inflation because restrictions on mobility have limited the opportunities to go out and spend. “With warmer temperatures coming and vaccinations set to cover a large part of the vulnerable population,” Ahya continued, “we are confident that the relaxation of restrictions will pick up speed. That burst in demand will meet supply chains for many global products that are disrupted and are struggling to keep up”.

Copper is used in all kinds of manufacturing and is called “Dr. Copper” for its ability to forecast economic conditions and rising inflation. The message from the doctor in 2020 was clear: copper prices rose by 67%. Other raw materials like iron ore and oil confirmed the trend with triple-digit 2020 price increases.

“Everything costs more” is the outcome the central banks like the Fed and the RBA have sought for years as they struggle to make debt loads easier to pay off, and unfortunately it looks like they will get their wish. Investors wanting to preserve their buying power can get ahead of the game and use the recent softer gold prices to stock up on one of the world’s most reliable inflation hedges. With outright ownership, instant liquidity, and our new Mastercard merchant “tap and pay” capability, Rush.gold is the best way to prepare yourself for liftoff.