The U.S. administration has established a financial Maginot Line across the world economy. It looks like those who own gold will be on the right side of that line.

Rarely do you get a candid discussion of the nature of our debt-based national currencies in the world of banking and investments. But in reacting to the Russian sanctions, the Wall Street Journal recently provided exactly that conversation.

Sanctions imposed on Russia for its military action in the Ukraine froze about $US 300 billion of Russia’s $US 640 billion gold and foreign exchange reserves. This limited the ability of the Central Bank of the Russian Federation to support the rouble with dollars and euros held in foreign currency and gold reserves.

To quote the Wall Street Journal (WSJ), a simple “flip of the switch” meant that Russian foreign exchange reserves held in banks around the world no longer existed. That action did not mean Russian foreign exchange reserves were merely blocked or confiscated, subject to later adjudication in a court of law. Rather, Russia’s money in the form of ledger entries at multiple banks just disappeared.

To get a sense of the enormity of this decision, you need to understand that this action is unprecedented in recent world history. No matter how harshly we wish to punish Russia’s deadly actions in opposing continued NATO expansion, we must note that this has never been tried before on such a major scale.

Even during World War II, the U.S. and its allies allowed the Bank For International Settlements to continue to process transactions from the banks in Nazi Germany. National currencies and the international banking system were considered to be much too critical to shut down, even during wartime.

In the article the WSJ restates something that gold investors have known for years but banks and governments would probably prefer that people did not think too much about:

“Many economists have long equated (bank) money to savings in a piggy bank, which in turn correspond to investments made abroad in the real economy.
Recent events highlight the error in this thinking: Barring gold, these assets are someone else’s liability—someone who can just decide they are worth nothing.”

This leads us to look at what and who is on either side of this new financial Maginot Line. Prime Minister Modi in India, for example, would have wondered “Could the Indian rupee be the next currency to be cancelled?” He made it clear that his nation would not go along with the sanctions regime. Other nations, from Brazil to Mexico to Saudi Arabia, made the same decision.

The rise of commodity money

This stark new state of affairs has compelled analysts to break down what the possible effects will be, both for the West and for the world economy as a whole.

Towards the end of World War II, the new world monetary order was negotiated at the Bretton Woods Conference. The U.S. possessed most of the world’s surviving industrial and resources capacity and was able to impose an order favouring that dominance.

The era after 1971, when U.S. President Nixon severed the last connection between the dollar and gold, has become known as “Bretton Woods II”. This world monetary order has been based primarily on the expansion of debt, and not primarily on resources or on industrial dominance.

Now these dramatic developments regarding Russia have commenters calling this “The Beginning of Bretton Woods III”. Legendary analyst Zoltan Pozsar from Credit Suisse summed it up perfectly:

As a major global commodity producer, Australia has a chance to emerge as a superpower in the new commodity currency order. This is especially true if our political class changes course from continuous debt expansion to balance sheet repair.

But on an individual level, we can borrow a page from Russia’s financial playbook, even if we completely disagree with that country’s military actions. Like Russia, we can do our own personal balance sheet repair.

In 2014 Russia  faced a similar sanctions assault on their finances. They took decisive action as a result. They paid down their overall debt. They reduced their holdings of debt-based currencies, especially the U.S. dollar. And, most importantly, they acquired large quantities of gold, which now represents 22 per cent of their overall holdings.

Faced with the unprecedented onslaught of the sanctions, the Russian rouble dropped precipitously. So Russia quickly established a formal link between the rouble and gold .

We can see the effect of Russia’s return to sound finances in the following chart. Faced with the unprecedented onslaught of the latest sanctions, the Russian rouble dropped precipitously. But within weeks it had rebounded, and is now above the levels at the start of the war. 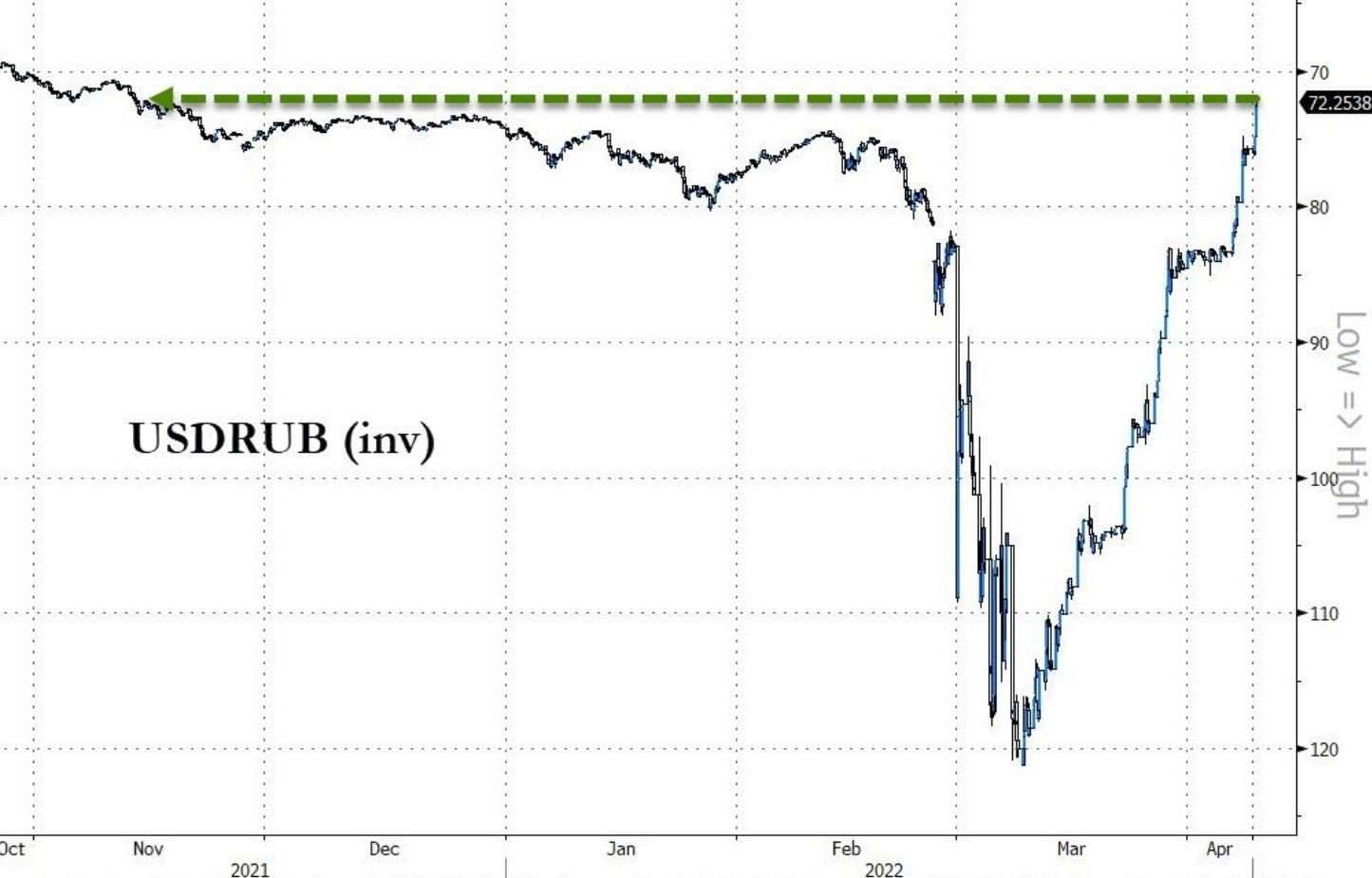 Bank debt is simply a money substitute. Its lack of direct ties to productive economics, through things like resource extraction and industrial production, means that eventually it disconnects from the real world of goods and services. Once it does, people begin to question its value. And since its value is based on belief, when the belief goes, so does the value.

Gold is money that cannot simply be cancelled. It is born of hard labour and is revered around the world for its immutability, beauty, and independence. At Rush Gold we make it easy and liquid to buy, sell, send, spend, and more. So regardless of what happens in the world you can still have your own private gold standard.