Here at SendGold, we’ve been familiar with crypto-currencies since 2013. We tested the first live version of our MVP (minimum viable product) platform on a distributed ledger in 2015.

We spent years transacting on each of the major competing blockchain platforms, working with industry-leading engineers and law firms on legal ownership rights and regulatory risks, identifying IT cyber-security risks and mechanisms to mitigate them. And on a personal basis, we have also traded BTC and several other alt coins for many years, taking advantage of early arbitrage and massive growth.

However, SendGold is not dependent on blockchain now in any way. So we thought we would comment briefly on a few selected statements that are sometimes made about crypto-currencies and how they compare to direct physical gold ownership.

“Bitcoin is a store of value”

We think the label “a store of value” is a coveted one, and we’re unclear why an asset that lost 85% of its value just 18 months ago would qualify for it.

We also think a store of value must prove it can retain that value over time. Bitcoin has been around for about a decade, through a period of (believe it or not) relative stability in world politics and economics. But history is full of political revolutions, economic depressions, currency regime overhauls, and even wars. We’d have to check in a few decades to see whether the Bitcoin letter and number combinations were still considered valuable before the “store of value” label would apply.

It’s simple to research “The DAO” when the developers of the second-largest crypto-currency chain Ethereum got together and decided to change the ledger. Numerous ledger entries were zeroed out.

People may also have heard the term “51% attack”. If more than 50% of the validating nodes agree, they can change the “immutable” ledger to whatever they would like. They could assign 1,000,000 Bitcoin to themselves or could change other Bitcoin ledger entries to zero.

A tool launched recently by the University of Cambridge Centre for Alternative Finance shows that 65% of Bitcoin validating node “hashpower” is controlled from servers physically located in The People’s Republic of China: 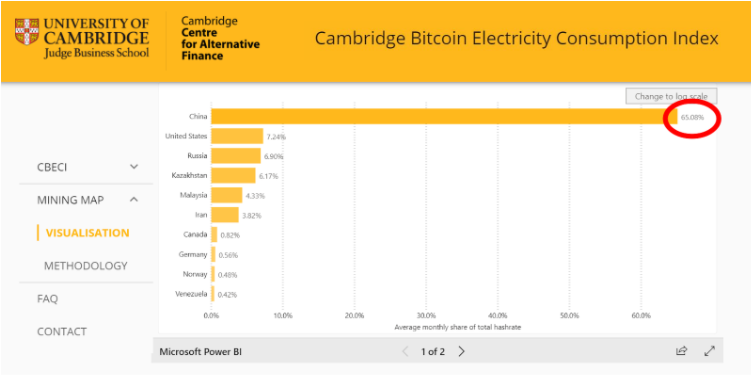 Fungible goods are items that are interchangeable because they are identical to each other. This is why one dollar is exchangeable for any other dollar.

But one Bitcoin is not the same as another: they are composed of unique letter and number combinations. This was brought home a few weeks ago with the stunning seizure by the U.S. Department of Justice of $1 billion in Bitcoin that had previously been used in 2013 in the infamous “Silk Road” dark web crimes.

It’s not clear how to be certain that the Bitcoin you might own in a wallet, pool, exchange, or fund was not previously used for criminal activity and could be subject to confiscation. There are rumours in the business that some buyers are paying a premium of 20% or more to purchase so-called “white” or “virgin” Bitcoin (that has never been used) directly from miners. In the 2019 G-20 meeting the leaders agreed to begin enforcing Financial Action Task Force (FATF) rules on crypto-currencies.

We are technology innovators ourselves and applaud new developments, especially in finance. But we think it’s important to make accurate assessments of new technologies, and it’s especially critical that those new technologies fit entirely within the boundaries of regulation and law. We think this applies both to assets accumulated for long-term wealth building and assets held for short-term speculation.

Insights – How can investors keep their eyes on the big picture, no matter who the U.S. president is?

A shine of certainty in an uncertain world

The U.S. administration has established a financial Maginot Line across the world economy. It looks like those who own gold…