After the rollercoaster rides witnessed in the crypto currency markets, and the ebbs and flows experienced in the bank credit systems, many are asking if there is a better form of money that will protect the value it represents.

Is there a better form of money? That’s the underlying and unsaid question hidden in the headlines in the financial press this month.

Sensational newspaper reports quoted panicked crypto currency investors claiming they would lose their homes because the value of crypto currencies including bitcoin had plunged in a so-called financial “bloodbath”.

For the majority of citizens in developed nations that have depended on bank credit, the near exhaustion of this source of finance is playing havoc with their lifestyles, particularly when you factor in inflation’s impact.

Take the case of Australia where the wages of millions have failed to keep pace with inflation over the past 12 months.  The “real” value of their wages – what they can purchase day by day or week by week – has been deteriorating.

To answer our original question, we have to first agree on the premier responsibility for money. We argue that money’s highest duty is to keep pace with the costs of goods and services: to store labour across time and space.

If you agree with that supposition, then gold may be the best form of money because it is anchored in the world of physical goods and services. It is itself a good.

Moreover, we can see how well this has tracked against the real-world costs of goods and services in the following chart (inflation measured using 1980 calculation methods by Shadowstat): 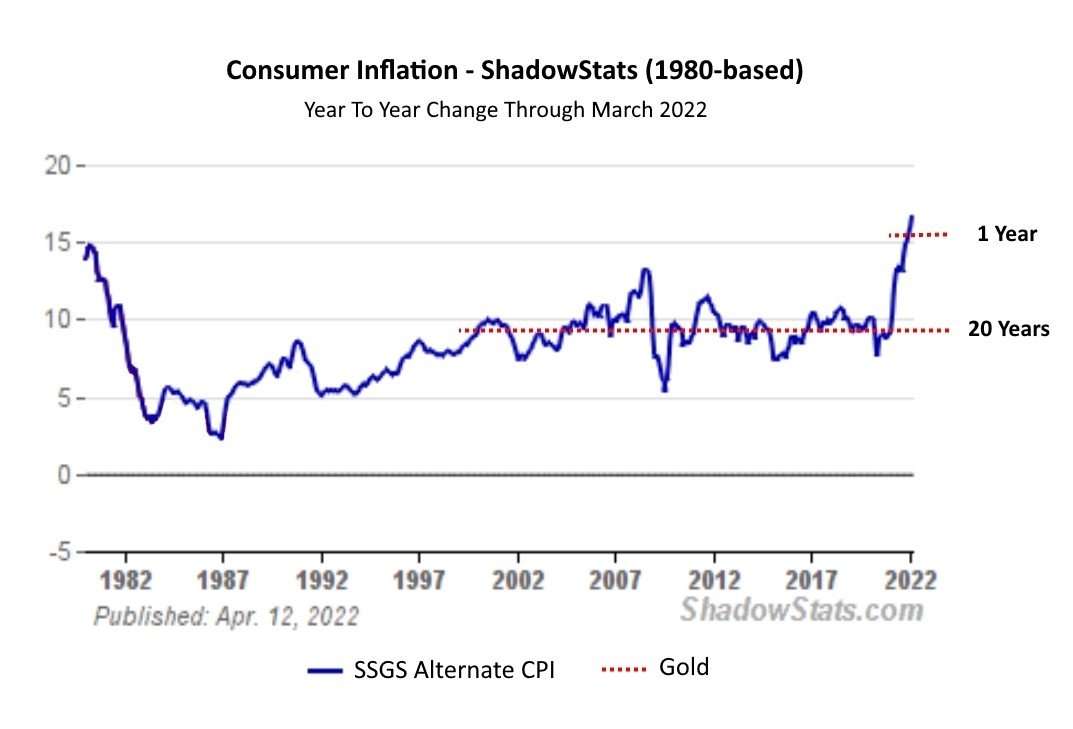 Statistics like these are interesting historically, but why should we consider gold a dependable form of money in the future?

First, because it is a physical good that is involved in many decisions taken in the real economy. In other words, gold is anchored in exactly the activities that money is meant to facilitate.

These decisions are wide ranging, made by governments, corporate entities and individuals.  For example, a high-tech manufacturer in Germany decides to buy gold for use in electronic manufacturing or a central banker in Turkey uses gold to defend the relative strength of the nation’s currency. At an individual level, an Indian consumer buys a gold necklace as a form of savings, while a Vietnamese family acquires gold to buy a house. In Vietnam, a large proportion of house purchases are settled in gold.

Second, one of gold’s fundamental physical properties is that is immutable: it does not oxidise or rust away. In fact, practically all the gold ever mined in history is still in circulation above ground.

According to the US Geological Service, two thirds of the world’s recoverable gold has already been mined, with just a third remaining below ground. This is reflected in the decline in large new gold discoveries in recent years.

Nevertheless, gold detection and recovery technology has advanced at roughly the same pace as recoverable gold has become scarcer. The net effect has been that the supply of gold from mining increases at about 1.6 – 2 per cent a year. That rate also happens to be the long term growth rate of the world’s population.

So we have established that gold is a physical good that can be used in a practical sense in financial dealings around the world, while being in scarce enough supply to retain its value. But can it provide stability? Paper currencies, debt-based currencies and algorithms have all experienced instability.

However, gold as a form of money has endured for more than 2,000 years of human history. During that time it has retained its relationship between humankind and the things created around humankind. Significantly, it required no state, no governing body, no council of elders to try to determine the correct price or quantity of money needed at any point in time in the society.

In fact it is a form of money that endured every revolution and every change of government. It has survived multiple wars that spanned the globe and devastated the world economy. It has endured the fall of Rome, the Black Plague, and the Dark Ages.  Moreover, as a form of money, it has kept pace with the Industrial Revolution and even with the technological revolutions of the 20th and 21st centuries.

Economic outlook – inflation with a side of energy crisis

There is no doubt that the trajectory of inflation which almost every nation faces today is instructive for gold investors….